Here is where you do some of your required homework. Learn posting etiquette and an introduction to PVSRA in the Orientation Room. Learn more of PVSRA in the Study Hall. Learn using the tools via Indicator User Notes in PVSRA Downloads. Improper posts are deleted. If your posts repeatedly indicate you have not done this required homework, your membership is deleted. 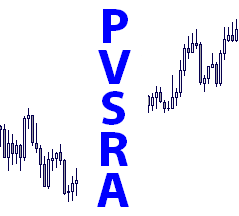 
When do we concern ourselves with HOLD, FOLD, SWITCH (HFS)?

The MMs constantly move price up and down (the market is all about liquidity). We become concerned with HFS if we have an open trade and PA goes to the opposite side of the Dragon for multiple closes, which can cause the Dragon to reverse angle. Look for a good price to close (since PA is probably still going up and down), and if that opportunity does not happen soon just bite the bullet and FOLD.

Generally, when PA switches to the opposite side of the Dragon and stays there for multiple closes, the Dragon tends to curve in the wrong direction and PA tends to eventually go further in the wrong direction. It often helps to drop to next lower chart TF and reassess the situation. A setup in the opposite direction might be forming! If we FOLD, we should also continue to monitor to see if we should SWITCH.

Sometimes, when our trade involves a Dragon with really good angle, the MMs will still drive PA to the opposite side of the Dragon for liquidity creation, but then back again. Throughout, the Dragon angle will remain decent. The quality of the setups we pick (Dragon angle & properly stacked Bias) will have something to do with how often we are confronted with making HFS decisions.

If PA runs your way to a TVT20 MOL, FIFO TP, then there is no problem. What if it doesn't? If it doesn't, then your choices are to HOLD, FOLD, or to SWITCH (Fold and open EP for a reverse direction trade)....

HOLD - If in this reversed direction PA you see a previous setup BO ranging area, then that PA level might be the MMs' target for the reversed direction PA; to "go back" to COMPLETE the SM orders for the same trade you just entered! If this previous order filling area/setup BO ranging area is within your risk tolerance, then HOLDING and maybe even adding if PA makes that area, might be a profitable decision.

FOLD - If you do not see such a trade redeeming aspect for the reversing PA, then FOLD at the best price you can.

SWITCH - Having no trade now, if your view of this reversed PA later shows good reason to gamble on it's continuation, then switch at the best entry price you can. The chart below shows an example of this.

The bodies of candles, and their associated histogram volume bars, have colors: green & blue for bull bars, red & violet for bear bars. Green and red mean higher product of volume x candle body spread. Blue and violet just mean higher volume. The term "higher activity" means significantly higher compared to the same computation of average for the 10 preceding candles. But these are just details to help ferret out relative increases in activity that might be important. So, the analysis can be quite effective if you just acknowledge that these colored bars......PVA bars.....represent sudden higher activity that might be important. So, no matter if bull or bear and what color, they all mean the same thing: important activity. This makes it simple!

Now, the analysis task is to see if the PVA bars are tending to favor higher or lower prices as the MMs cycle PA up and down. Favoring lower prices is bullish and favoring higher prices is bearish ("Buy low. Sell high!"). Also, see if the PVA bars are tending to favor the bottom side or top side of key levels (whole levels and half levels). Favoring the bottom side is bullish. Favoring the top side is bearish. Such analysis is not always easy. There will be times you cannot know if the PVAs should be classified as below a whole level or above the half level below the whole level. Just as with any analysis, sometimes you must wait on more PA in hopes of better clues to form a bias consensus.

Finally, keep in mind that the more recent PVAs, the current day and previous day vs those further back in time, tend to be the more important PVAs (confirming or non-confirming). Also, keep in mind that our trade setup specifies that there should be some PVAs leading into the setup (final SM order filling ahead of a breakout). In addition, keep in mind our setup also looks for PA momentum, best evidenced by the properly stacked Dragon and Bias moving averages, with the Dragon showing good angle!

Scan for Setup Candidates
Reduce the list of items you accept to regularly trade. Don't end up a "Jack of all trades and master of none!" by seeking to find and shoot at anything that moves.
Anytime from the Hong Kong open into the New York session, look for the MA pattern showing the Dragon angling up or down, and accordingly, properly stacked with the Bias.
And generally, the closer the Bias is to the Dragon centerline as the Dragon begins to move away from the Bias, the better.

Monitor Your Candidates
Keep watch for EP opportunities. This is how most of your trading time will be consumed. Be cautious about those candidates with same day scheduled "high impact news".

Manage Activity and Risk
Keep the aggregate size of all open EPs less than 1 micro-lot per $100 of account equity. Equity fluctuates with changing account P/L; keep this in mind! These basics will help you:

1. Limit yourself to 2 concurrent trades. If you later see a better opportunity, close your worse trade before proceeding with another one.
2. Limit yourself to 2-3 EPs per trade. Perhaps one for adding if PA moves nicely per your trade, saving one for a PA retrace if you see it as not invalidating the trade.
3. Limit the time within a trade. Take small profits quickly. Don't linger in the absence of PA progress. Use the TVT 20 (MOL) FIFO technique.